Across town on Madison Avenue, Lévy Gorvy Gallery takes music seriously enough to retain the services of an astute cultural program curator, Brett Sroka, himself an accomplished composer and trombonist. On Sroka’s watch, the gallery has presented ambitious performances by Peter Evans, Burnt Sugar, Alicia Hall Moran, and Maria Chavez, each linked in some meaningful way to the art then on view. And on Nov. 28 Lévy Gorvy complemented its current show, Calder/Kelly, with a performance by TILT Brass, eight of whose members dispersed among the gallery’s three floors and stairwell for the premiere performances of Vertical Octet by the Brooklyn composer and improviser Lea Bertucci.

From conception to execution, this event was a thoroughgoing success. The show, a mix of mobiles and stabiles by Alexander Calder (1898-1976) and paintings by Ellsworth Kelly (1923-2015), is meant to commemorate the friendship between these two artists, who exchanged letters and artworks, and who spent some formative portion of their careers in Paris. In real terms, it was a conversation between Calder’s three-dimensional forms, whether solid and grounded or spindly and suspended, and Kelly’s planes of solid tone, whether monochromatic or with contrasting hues in proximity.

Searching for a composer similarly preoccupied by shape, space, and planes of tone, one could hardly do better than to choose Bertucci, whose recent works have pursued a similar focus on tones and overtones, on flatness and mobility, and on sonic volume situated within spatial volume. Many of Bertucci’s scores themselves approach a quality of visual art, and in 2017, with author and artist Michael Anzuoni, she oversaw the editing of The Tonebook, a gorgeous collection of graphic scores published by Inpatient Press. Peeks at some of the parts on music stands here before the performance started revealed a combination of conventional notation and graphic gestures.

To celebrate the exhibition, Terry Adkins – The Smooth, The Cut, and The Assembled at Levy Gorvy Gallery last February, Greg Tate, with the Burnt Sugar Arkestra Chamber conducted a live score to Adkins’ video work Synapse — A Faustian portrait of Beethoven glacially transforming into a young black man and back, pondering the rumors of Beethoven’s Moorish ancestry, as well as his triumph over deafness.

Terry Adkins created performances he called Recitals as part of his installations and exhibitions, after they had been open for a time and he felt they needed to be “activated”. At Performa in 2013 Adkins dedicated his Sacred Order of the Twilight Brotherhood Recital to his friend, the composer Butch Morris, who had just died of cancer, sadly about a year before Adkins would also succumb to the disease. Butch Morris was the type of iconoclastic, under-recognized figure that Adkins might’ve explored in his work. He invented a ground breaking form of improvisation called Conduction, using a highly refined language of gestures to shape the music of an improvising ensemble in performance.

Acclaimed musician, writer and cultural critic Greg Tate became friends with both Adkins and Morris as a teenager in Washington D.C. in the 1980’s. Calling Morris his “sensei” Tate was inspired to study and begin practicing Conduction, forming the Burnt Sugar Arkestra Chamber in the late 1990’s. Their prismatic, organic integration of avant-garde jazz, electric funk, rock and contemporary composition was beautifully adapted for a live score to Adkins’ droning Synapse video, and to celebrate the lives and achievements of both Morris and Adkins. 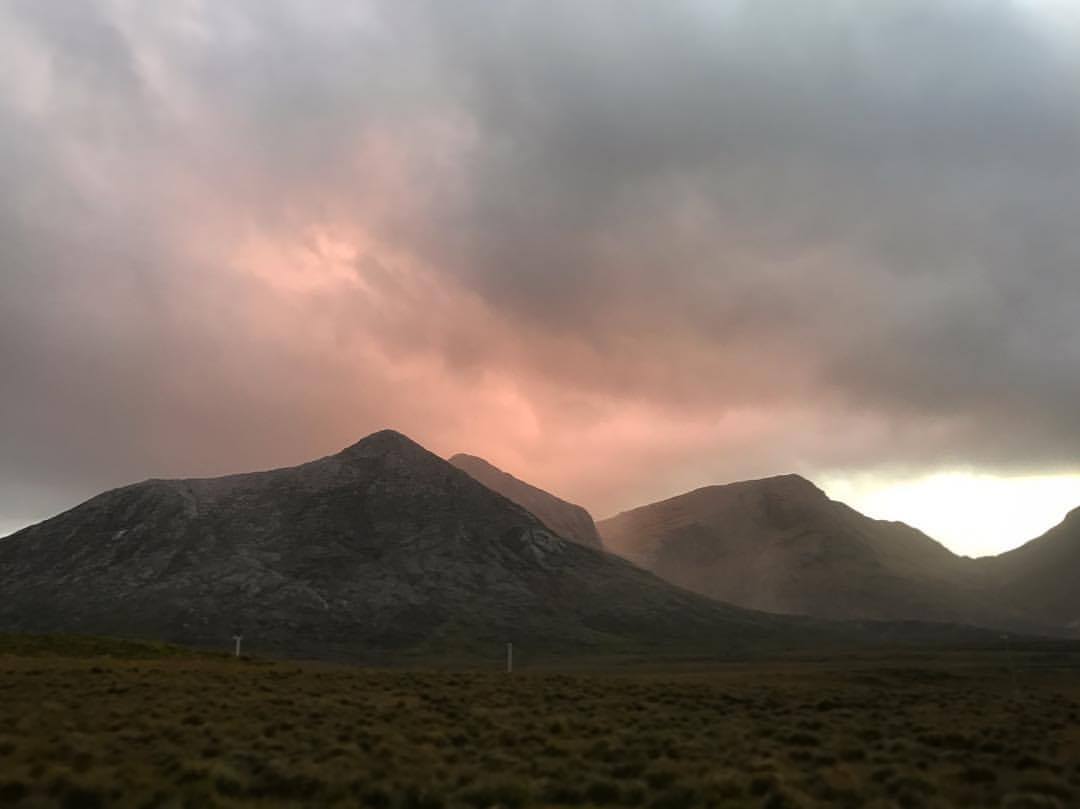 I’ve had an amazing few months traveling through Australia and Europe, leading up to two exciting events this week. I spent August as an artist in residence at CAMAC Art Centre in Marnay-Sur-Siene, France and for the past month at Interface in the stunning Inagh Valley of Connemara western Ireland, culminating with a performance at the Galway Jazz Festival this Saturday, October 10th. I’ll be performing with Rauno Nieminen, a renowned performer, luthier and scholar of the medieval instruments of Northern Europe, who I began collaborating with in Finland in 2014. When I first met him to experiment with processing his instruments through MaxMSP software, he said to me, “the kantele is the national instrument of Finland and the Kalevala (creation myth), so it will be important to destroy it.” Here is a recording of us doing that.

Next Wednesday, October 11th, I’ll be back in New York in my capacity as Cultural Program Curator at Lévy Gorvy Gallery where we will present a concert in celebration of the exhibition Pat Steir: Kairos. Starting at 7pm with a set by the phenomenal Sandbox Percussion, and followed by a set from singer Alicia Hall Moran, guitarist Brandon Ross and bassist Melvin Gibbs that promises to be fantastic.

I look forward to seeing you there or wherever we may meet again.
~Brett
www.brettsroka.com

There's a joke about a guy who explains what he does in life by saying: "I'm a jazz musician but I'm only in it for the money." – For these past few weeks I had no idea that I was living amidst this obscure gem of jazz history: Frank Ténot, the founder of CAMAC, was a French media mogul and jazz impresario, who from 1955-71 broadcast the radio show "Pour Ceux Qui Aiment le Jazz" and later, "Salut les Copains" on Europe n° 1, from this very building in the little town of Marnay-Sur-Seine (where he was also later the mayor). These shows were largely responsible for introducing jazz to Europe. I discovered these magnetic tape archives, covered in dust and cobwebs in the former studio downstairs, and I'm told that greats such as Ray Charles and Duke Ellington performed right here. – This is an article about Tenot buying Jazzman magazine in 2003, one year before he died – http://www.nytimes.com/2003/04/23/style/paris-jazz-frank-tenot-expands-his-empire-of-music.html?mcubz=1

“Music is your own experience, your thoughts, your wisdom. If you don’t live it, it won’t come out of your horn. They teach you there’s a boundary line to music. But man, there’s no boundary line to art.” – Charlie Parker

The Chinese painter Zao Wou-Ki moved to Paris in 1947 with his wife Lan Lan, a composer; amidst the artistic circles there he befriended Edgard Varèse, the inconoclastic composer of dense works of dissonance, noise and visceral new electronic sounds. In 1964 Zao dedicated a monumental painting to his friend.

Dutch born painter Willem De Kooning often claimed his love of jazz as an inspiration for coming to America, once saying, “‪[Miles Davis] doesn’t play the notes, he bends them. I bend the paint.” With a technical facility that was both effortless and explosive, Davis’ mentor, Charlie Parker, would also influence every generation of jazz musicians to follow with the serpentine rhythmic swing and visionary harmonic flights that would become known as bebop. Shortly before his death in 1954, Parker sought out Varèse to study orchestral music with him, while they were both living in Greenwich Village.  Varèse said of Parker, “He was like a child, with the shrewdness of a child. He possessed a tremendous enthusiasm.” The two never met again, but the encounter would resonate with Varèse as well and in 1957 he composed a graphic score for improvisation and recruited some of the top jazz musicians of the day to perform it. I’m thrilled that Ergo – As subtle as tomorrow was included on the New York City Jazz record‘s Best Albums of 2016 in their January issue. Thanks to the many people that worked on it and everyone who gave it their time and ears. Upwards and onwards!

“Ergo has fine-tuned an unusual and evocative mix of tautness and incongruity…. There are a lot of unusual elements at play but what makes Ergo so great is that in the end all the parts fit.” – NYC Jazz Record

I’ve recently taken on the role of Cultural Programming Curator at Dominique Lévy Gallery where I’ve been programming performances for the last year or so. This Thursday the wonderful new percussion ensemble Sandbox Percussion will perform in celebration of our current exhibit of the sculptor Joel Shapiro. To sonically consider the playful weightlessness and the deceptive simplicity of Shapiro’s materials, forms and suspended installations, Sandbox Percussion will perform a program of Akiho, Cage, Crowell and Reich on December 8th.

Lauded by The Washington Post as “revitalizing the world of contemporary music” with “jaw dropping virtuosity,” Sandbox Percussion has established themselves as a leading proponent in this generation of contemporary percussion chamber music. Sandbox made their New York debut in 2012 and in their fourth season last year gave a staggering twelve world premieres by new music composers at venue’s including the Norfolk Chamber Music Festival, the Yale New Music Workshop, Peabody Conservatory, Curtis Institute, Cornell University, and Brooklyn’s National Sawdust. Through compelling collaborations with composers and performers, Jonathan Allen, Victor Caccese, Ian Rosenbaum and Terry Sweeney seek to engage a wider audience for classical music.

This Thursday, December 1st, 6pm at the Cooper Gallery of African & African American Art at Harvard University artist/activist Shani Jamila will give a talk and present her short film Altar: A Moving Meditation, featuring the electro-acoustic vocal music I made with Alicia Hall Moran. Altar was premiered at the New Museum in September and is fittingly screened at Cooper Gallery as part of the exhibit of artist Carrie Mae Weems – I once knew a girl…

Through a serendipitous intersection in my life, my work at Dominique Lévy Gallery has evolved to include occasional music programming, and on June 7th we will present the phenomenal Jen Shyu in a performance of her Solo Rites: Seven Breaths. I saw this gorgeous and intense piece premiered at Roulette in 2014 and thought it would be a wonderful compliment to the first U.S. solo exhibition and career survey of the Korean, monochrome artist Chung Sang-Hwa, presented in collaboration between Dominique Lévy Gallery and Greene Naphtali Gallery. This is a FREE event with RSVP to mackie@dominique-levy.com

“She has drawn large parts of her music from travel and study in places including East Timor, Taiwan and Indonesia, where she has learned spoken languages, folk narratives, dances and instrumental techniques… There’s great erudition in her work, but she wears it lightly; what you notice, both in her singing and her band-leading, is wild originality, purpose and discipline.” – The New York Times